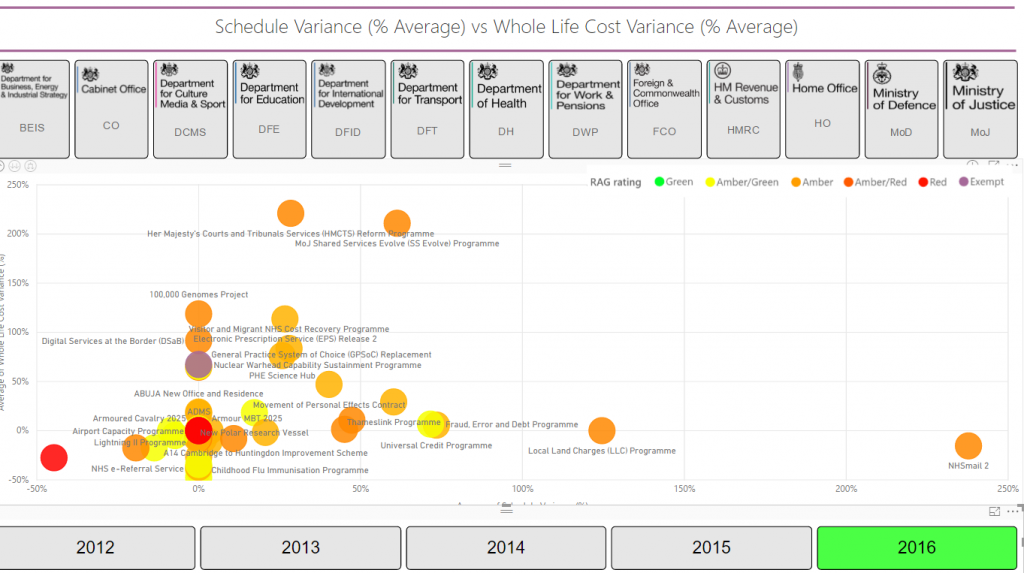 Since 2012 the UK’s Infrastructure Projects Authority (IPA) has published data on the performance of the government major projects portfolio (GMPP). In 2017 this included 143 projects with a whole life cost of £455bn.

The spreadsheets are published on an annual basis with a lead time of approximately 10 months (the data was sampled in Sept 2016 and published in July 2017). Noting that the data will have to be reviewed at a department level prior to release, the data may actually have been extracted from schedules and spreadsheets up to 2 months earlier.

In comparison, the US and Australian governments publish near real time updates of data utilising interactive tools. The Western Australian Government has adopted the following five principles for open data within its Whole-of-Government Open Data Policy: data should be open by default; easily discoverable and subject to public input; usable; protected where required; and timely. Both governments view pubic accountability as a key factor in helping to drive culture change and improve project performance. See IT dashboard for the US version and ICT dashboard for the Australian dashboard.

Noting the depth of insights provided by other governments, why is the UK government not following a similar approach. Is it time that the entire GMPP and wider portfolio of projects is subject to wider public scrutiny? The costs associated with developing such a capability are not great; our website and embedded GMPP analysis cost approximately £19,000 to produce. I agree that there is a burden associated with reporting the data, but by importing data from on line cost and schedules which need to be produced as part of robin project management it can be delivered cost effectively. Are there any real obstacles to prevent the IPA from compiling live data downloads, rather than developing offline reports which are often subject to massaging? Most of this could actually be automated, so once set up the burden should be minimal.

In January 2018 we compiled all available GMPP data and imported it into Power BI. This provided us with an excellent opportunity to interrogate the data and visualise it. Our primary focus was to test 2 hypotheses:

We also wanted to demonstrate what could be achieved in a short period of time with a relatively small amount of resource.

We will be rolling out additional insights over the coming weeks.

The results are fascinating (please see the interactive charts on the homepage):

If we calculate the variance against the first recorded data point instead of in year variance we derive the following:

Is the portfolio overmarked? Whilst we accept that the assessment of RAG is an imprecise science, this analysis indicates that there is evidence to suggest that the portfolio overall may be overmarked. It should be noted that our variance analysis does not take account of performance variance, i.e. where scope or capability has been traded to maintain cost or schedule, which would compound the challenge.

Is the situation improving? The IPA’s own analysis illustrates that the projects joining the portfolio often suffer from a challenging birth. The analysis above indicates that in year variance is getting worse, year on year. We accept that our analysis is not perfect because of the quality and completeness of the source data, but it indicates that it is a cause for concern and further analysis. It should also be noted that the GMPP accounts for the tip of a very large and expensive iceberg.

Exploitation of the data

The data that the government releases is generally difficult to analyse and when compared to international comparisons, there is an opportunity for the UK government to embrace new MI and BI tools.